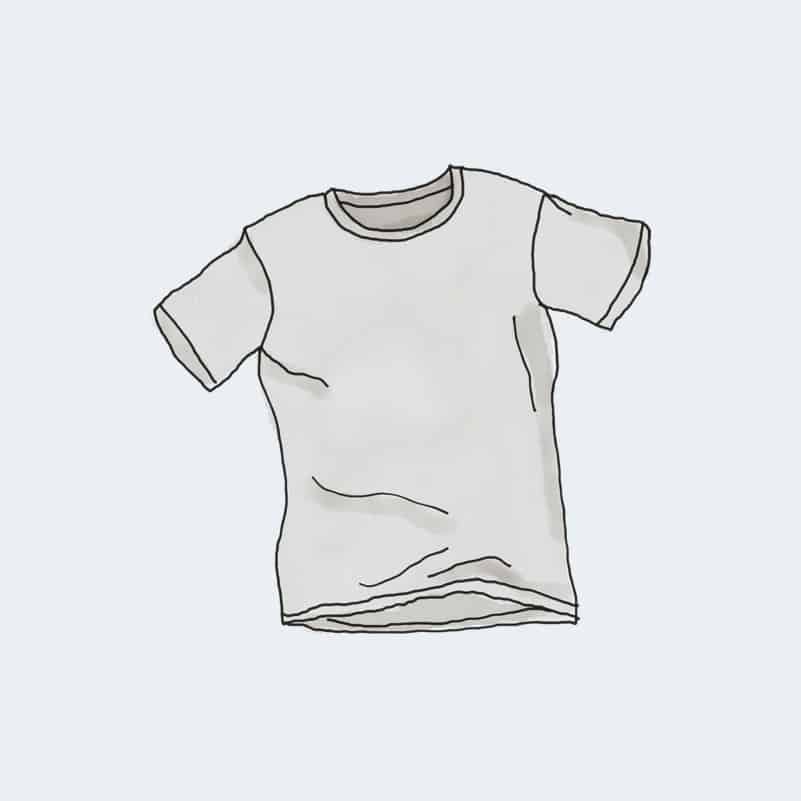 A T-shirt (or t shirt, or tee) is an apparal  named after the T shape of its appearance. It normally has half sleeves and a round neckline sometimes referred as a crew neck, which lacks a collar. T-shirts are generally made of cotton mostly combed cotton.

Combed cotton is a kind of cotton that has been combed to make the yarn stronger and softer. The combing process also rids the batch of shorter fibers and impurities, which results in a finer, stronger and more compact cotton. While Regular cotton made from the cotton plant is developed using cellulose with a thin coating of wax. This creates a thin cotton fiber that is similar to a hollow tube, much like a straw. Basic cotton fiber is used to make things such as shirts, pants and other clothes.

T-shirts are typically made of cotton jersey knit, it has a distinctively pliable texture compared to shirts made of woven cloth. Most modern versions have a body made from a continuously woven tube, produced on a circular loom, such that the torso has no side seams. The manufacture of T-shirts has become highly automated and may include cutting fabric with a laser or a water jet.

The T-shirt evolved from undergarments used in the 19th century and, in the mid-20th century, transitioned from undergarment in US Navy to general-use casual clothing. The T-shirt was easily fitted, easily cleaned, and inexpensive, and for those reasons it became the shirt of choice for young boys. The word T-shirt became part of American English by the 1920s, and appeared in the Merriam-Webster Dictionary. In the 1960s, printed T-shirts gained popularity for self-expression as well for advertisements, protests, and souvenirs.

Current versions are available in many different patterns, prints and fabrics, and styles include crew-neck, Henley neck, V-neck shirts. T-shirts are among the most worn garments of clothing used today. More than a Billion T-shirts are produced worldwide per annum. T-shirts are especially popular with branding for companies or merchandise too. Now many merchants are selling online t-shirts in india.

We use cookies on our website to give you the most relevant experience. By clicking “Accept All”, you consent to the use of ALL the cookies. However, you may visit "Cookie Settings" to provide a controlled consent.
Cookie SettingsAccept All
Manage consent

This website uses cookies to improve your experience while you navigate through the website. Out of these, the cookies that are categorized as necessary are stored on your browser as they are essential for the working of basic functionalities of the website. We also use third-party cookies that help us analyze and understand how you use this website. These cookies will be stored in your browser only with your consent. You also have the option to opt-out of these cookies. But opting out of some of these cookies may affect your browsing experience.
Necessary Always Enabled
Necessary cookies are absolutely essential for the website to function properly. These cookies ensure basic functionalities and security features of the website, anonymously.
Functional
Functional cookies help to perform certain functionalities like sharing the content of the website on social media platforms, collect feedbacks, and other third-party features.
Performance
Performance cookies are used to understand and analyze the key performance indexes of the website which helps in delivering a better user experience for the visitors.
Analytics
Analytical cookies are used to understand how visitors interact with the website. These cookies help provide information on metrics the number of visitors, bounce rate, traffic source, etc.
Advertisement
Advertisement cookies are used to provide visitors with relevant ads and marketing campaigns. These cookies track visitors across websites and collect information to provide customized ads.
Others
Other uncategorized cookies are those that are being analyzed and have not been classified into a category as yet.
SAVE & ACCEPT